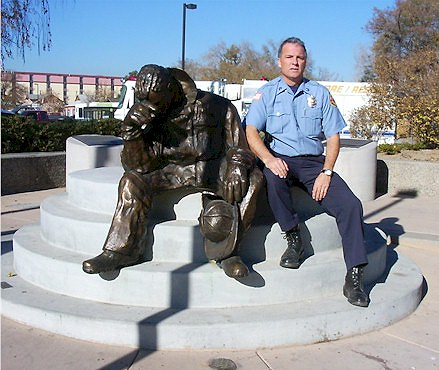 I came up the idea for the monument a few years ago. My inspiration for the idea was sparked as a result of being a member of the Sparks Fire Department since 1990. I recognized the quality of people I was working with. The commitment, dedication and the tight knit family a fire department becomes is unique and truly special. I wanted to put together something special and permanent that would pay tribute to the men and women of the Sparks Fire Department as well as the Departments rich history. I spoke with Sparks Fire Chief Lee Leighton about the idea and he thought it would be a worthy and deserving project to pursue. He encouraged me to look for ways to make it happen whether through private or public funding. I approached Redevelopment/Councilman Phil Salerno with ideas for funding the project and with his recommendation; I went to City of Sparks Redevelopment Agency and made the formal presentation and request. Phil was the point man on the City Council/Redevelopment Agency and was instrumental in helping push through the approval of $30,000 in funding.

For sometime, previous to the approval of the funding for the Monument, I had been in contact with numerous other Fire Departments and Memorial/Monuments in the United States to get ideas on design and costs. I formed a Monument Committee to get help, ideas and approval on various phases of the project. There has been a tremendous amount of work put into this project and many people have contributed enormously towards the success of this monument. I ended up with a sculptor from Colorado by the name of Gary Coulter. Gary and his wife Debbie run Coulter Studios. Gary had already made a bronze statue cast of a grieving Firefighter for the Colorado Springs Fallen Firefighter memorial. He offered to let us use the same mold with 1 minor change and his generosity ended up saving us a tremendous amount of money. Shortly after my first contact with Gary Coulter he passed away from Cancer. His wife Debbie stepped right in and has always assured me that Gary would be so proud to see his sculpture used in our Monument. Debbie’s hands-on involvement since that time has helped tremendously to see that the statue is on track. The layout of the entire Monument came to me months before but has continually been fine-tuned as the project has evolved. I added a bronzed pick head fire axe and bronze inlaid boot prints to add movement to the bronze statue. It is as if the statue walked over to the circular steps with his pick head axe and sat down. Debbie Coulter sculpted the bronze pick head fire axe and the 7 bronze firefighter boot prints for the Monument. The monument covers S.F.D. History, Monument Dedication, and Fallen Firefighters (Nationally and within the 102-year history of S.F.D.) The site itself is an emotional setting. There are 7 bronze boot prints set directly into the concrete leading up to concrete steps where our life size bronze statue sitts in deep reflection. There is a bronzed axe next to where the statue is sitting. One large bronze plaque 36″ x 18″ that has the Firefighters Prayer is flush-set in the concrete right in front of the statue. In the background there are concrete stands where the large plaques with History, Dedication and Fallen Firefighter Memorial are mounted.

There are also 3 new flagpoles that will fly the American, Sate of Nevada and City of Sparks flags 24 hours a day. Up lighting is installed for the flagpoles and soft illumination lighting on the statue for the evening hours.

The $30,000 was only the first part of this project. The countless hours Sparks Firefighters have volunteered in the construction phase of the monument are the true blood, sweat and tears. 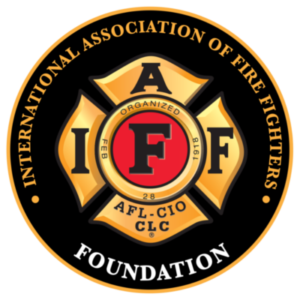 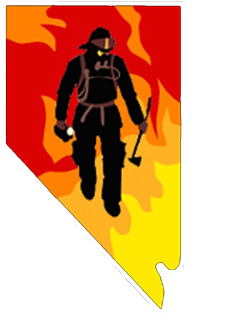